There are several scenarios where WingtraOne will take action by itself and engage a specific failsafe routine during flight.

The following table summarizes the different failsafe scenarios. More information can be found in the text below.

* By default, WingtraOne returns after 60 seconds of lost connection but you can adjust this value if needed. If you fly with a remote control (RC), WingtraOne will return 60 seconds after both links are lost and file a warning if only the RC link is lost.

RTH is triggered automatically in these scenarios:

Before WingtraPilot and WingtraOne v1.11, the low battery RTH is triggered at 38% of battery, unless an adaptive RTH is triggered earlier based on the time estimated for the drone to return to the home position.

Starting from v1.11, a smarter battery estimation combined with increased safety at landing results in a different, more trustworthy behavior of the displayed battery level and longer flight time.

WingtraOne computes the optimal time to trigger low battery RTH. In most conditions, it should happen after approximately 45 min (RX1RII) and 50 min (QX1). The factors that affect the RTH time are: absolute altitude of take-off location, distance to the home position, wind speed, wind direction, transition altitude, and RTH altitude.

RTH can also be triggered manually, see Flight modes and in-flight interactions. More details about the execution can be found in the Return-to-home chapter.

Battery RTH is not triggered automatically when WingtraOne flies in assisted mode. A pop-up message warns the operator that action might be required.

Warnings are issued acoustically and visually on the tablet. The mission can still be continued, but caution is advised.

This is the most extreme failsafe, as it forces WingtraOne to perform a back transition and land from the point the landing is triggered. It is triggered if the position of WingtraOne can not be defined. It can happen in the case of GPS loss or exhaustion of the battery. WingtraOne might drift since the position is not controlled in this case. You can still take over manually by switching to assisted mode. If an accurate position estimation can be regained, the emergency landing will be interrupted and RTH will be performed. 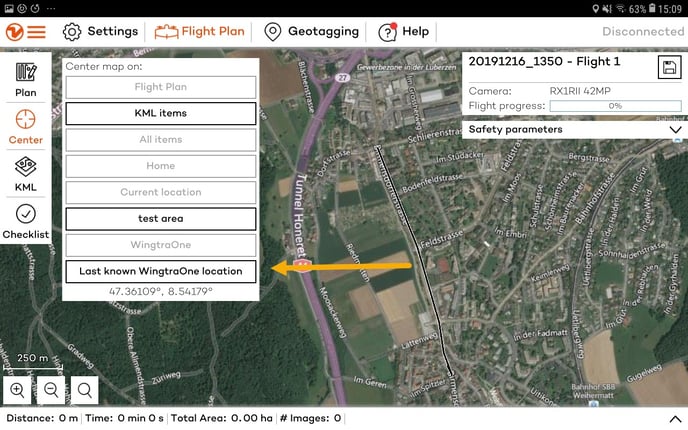