A guide to the workflow for preparing and executing a WingtraOne RedEdge-P flight.

The following information will guide you on how to acquire your multispectral data with RedEdge-P successfully.

All the flight planning parameters are set in WingtraPilot, as the image triggering is controlled by the drone.

In the Preflight checklist the camera check is automatically performed. 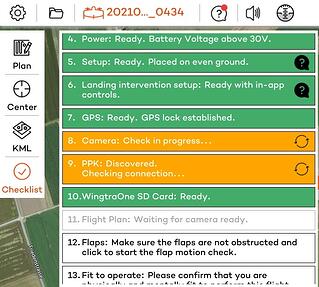 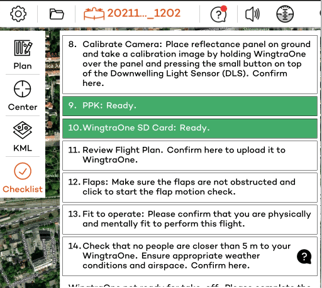 On item 8 of the checklist, you'll see the RedEdge-P camera needs to be calibrated with the provided reflectance panel. Only a timely calibration guarantees reliable spectral information of your covered flight area. For optimal calibration, make sure to take a calibration image before and after each flight. Once the calibration panel image is captured, click on the checklist item to confirm it.

For processing the information from the MicaSense RedEdge-P we recommend using Agisoft Metashape or Pix4D Fields. Follow the link to see the tutorial on how to process the images and generate the outputs.

For more information about the WingtraOne RedEdge-P setup, please have a look at the Set up the MicaSense RedEdge-P camera article.