Learn about the different flight modes and options to interact with a WingtraOne flight.

WingtraOne generally flies in either hover or cruise. Hover implies a vertical position of the drone for take-off and landing. In cruise, the drone is positioned horizontally for forward-flight, in which WingtraOne flies like a fixed-wing aircraft. The in-between stage, where WingtraOne moves from one mode to the other, is called transition.

To execute an entire flight plan, WingtraOne flies according to the following main flight modes.

This is the normal mode where WingtraOne flies the planned flight autonomously from take-off to landing. After you command the take-off on the tablet, WingtraOne performs a motor check, where both motors spin up separately. After four seconds, WingtraOne rises vertically to a pre-set transition height in hover mode. While ascending, WingtraOne orients itself to ensure the front side faces the transition direction.

After transition, WingtraOne flies to the loiter circle, where it rises to the mission height. After completing the planned flight area(s), WingtraOne flies back to the loiter circle to fly down to transition height. After the back transition, WingtraOne first hovers horizontally to the home position and then starts descending. Before initiating the descent, the WingtraOne turns its back side (Wingtra logo) towards the wind to achieve better gust response and a smaller tilt angle for the touchdown. WingtraOne descends horizontally at a rate of 1.5 - 2 m/s, depending on the wind speed. When the wind speed is below 5 m/s the descent speed is 2 m/s, while when the wind speed is above 5 m/s, the descent speed is 1.5 m/s. When it is 3.5 m (11.5 ft) above ground, WingtraOne slows down even more and lands automatically by shutting off the motors 0.25 m (.8 ft) above ground.

When the in-app controls (default mode) are enabled all the possible actions to interact with the drone are taken from the tablet by pressing the highlighted buttons. 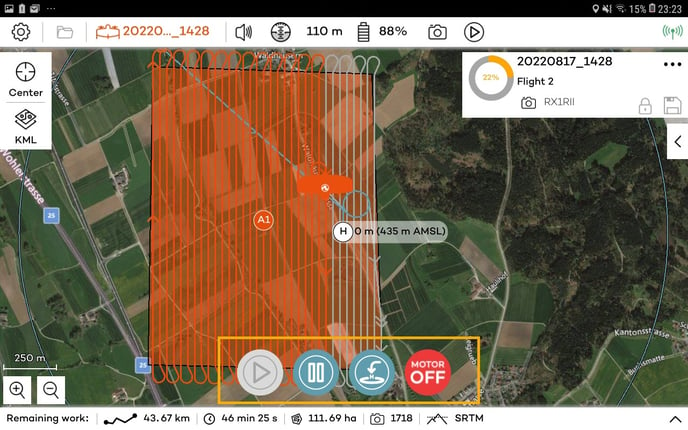 The following table describes the actions of each button taking them from the left to the right.

The motor off is a method of last resort used only in critical situations, because once activated there is no going back. The WingtraOne will cut power to both motors and activate one of the elevons to deflect at a high angle. This will cause a rapid descent with a tight spiral, which will crash land the drone. There is a high chance the drone will not be able to recover from an emergency landing. There are some extreme situations in which you might resort to using the emergency shut-off to minimize risk, as follows:

The motor off can only be triggered from the tablet by clicking on the respective button and moving the slider from the left to the right as shown in the images below.

THERE IS NO WAY TO REGAIN CONTROL ON MOTOR OFF!

Emergency button triggered from the tablet 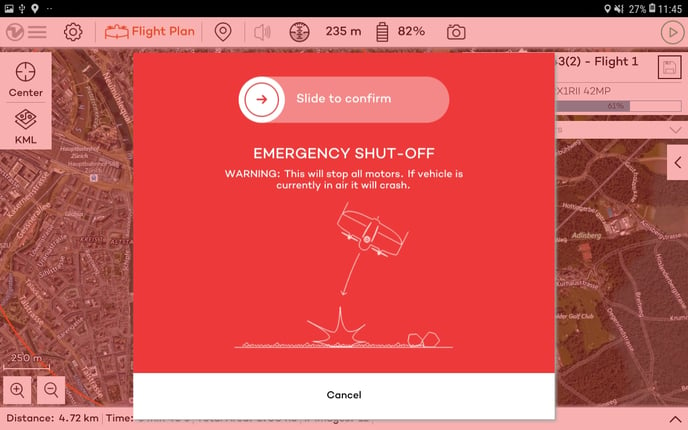 If RTH is engaged, WingtraOne flies back to the home point and lands autonomously. For more details, see the Return-to-home chapter.

Users can pause the mission in cruise by sending WingtraOne into a loiter circle. Example situations that this should be considered are:

The data collection can be resumed after Pause or RTH. For more details, see the Pause and Resume article.