Learn how to use the in-app landing controls in WingtraPilot to correct the landing location in case the landing spot becomes obstructed. You can find a video that guides you on how to reposition WingtraOne during landing at the end of this article.

WingtraOne can be fully controlled with just the tablet as a ground station. As of update 1.12, modifying the landing spot has become easier than ever before. Therefore, we highly recommend operating WingtraOne without using the remote control (RC).

Starting with update 1.12, you can pause and reposition WingtraOne during landing using the in-app landing controls in case the landing location is obstructed, or if you simply want to modify the landing spot. Without using the RC, you can hold or adjust the drone’s position until landing is feasible/preferred. This functionality is available only when RC use is disabled through the General settings or during the pre-flight check.

By pressing the pause button during landing, WingtraOne will stop, stabilize itself and hover in one place mid-air. You can then command the next movements, using the in-app commands, as it is described below. 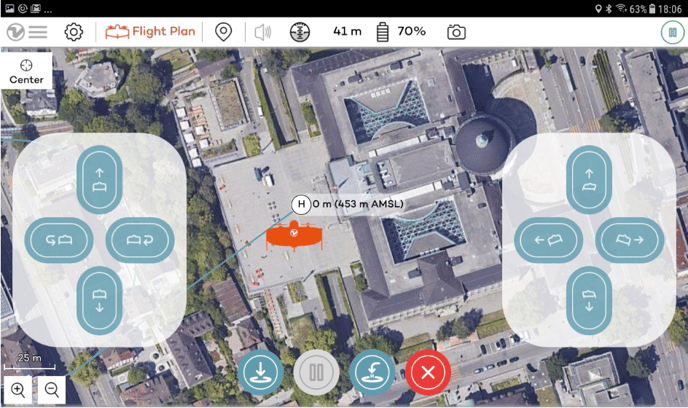 With the left-side buttons, you can command the WingtraOne to move up and down or control the orientation along its axis.

With the right-side buttons, you can command the WingtraOne to move forward and backward, or left and right, with respect to the camera position.

Once you have changed the position of the drone above the preferred landing spot, to land WingtraOne, you'll press the left button down until the drone touches the ground. Or you can press the land on the spot button. The land on spot button replaces the Start button during the flight. This will cause the drone to land automatically at the current position. After pressing the land on the spot button, you will need to slide to confirm in order for the landing to proceed. Another option for landing is to press RTH. This will cause the drone to hover back to the home point and land there.

Step by step instructions on how to use the feature

If the drone is about the land (e.g. 1-2 seconds before it would touch the landing surface), please do not interrupt the landing process by pausing or by taking over manual controls as this could lead to harder landings, potential damage to the middle stand and/or side stands and can increase the likelihood of tipping.