How the shape of the survey area affects RTH triggering

The main goal of this article is to provide insight into the correlation between the shape of the survey area and battery consumption.

With WingtraOne software version 1.9,  we introduced an adaptive RTH. That means the drone calculates when it should return home to guarantee a safe landing. It takes into account transition altitude, mission altitude, wind and distance to home. Triggering low-battery RTH is calculated based on the current battery consumption and the above criteria.

In this article, we will talk about the last one—distance to home—as this is the only one upon which the mapping area has an impact; the rest of them will be considered constant in both cases.

The area polygons are defined in such a way that they cover the entire area of interest on the terrain. For more information about how to create them, you can check here: https://knowledge.wingtra.com/create-a-new-flight-plan

There are two types of areas, based on the shape of the mapping features: 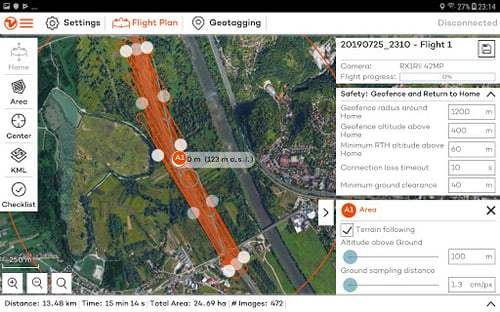 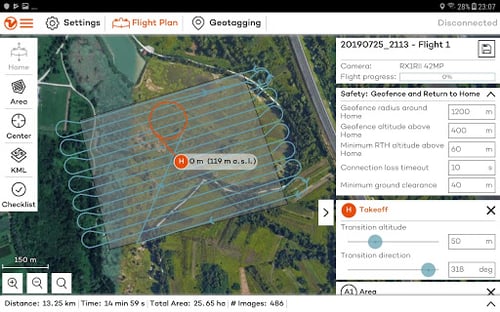 The above pictures present two flight plans of the two area shape types; both of them cover the same area (approximately 25 ha) and the home point is set approximately in the middle of the area of interest.

Other parameters that have an impact on adaptive RTH are considered to be the same in both cases, and their values are:

For both flight plans, we will consider the most extreme scenario—RTH is triggered while the distance to the home point is longest.

What is important to underline here is that the battery consumption during the turns will be approximately the same as during cruise, and turning will not cause adaptive RTH to be triggered earlier. The reason why this is so is because the thrust of both motors is increased just a tiny bit during the turning, and only the flaps are used to control the direction of the plane. 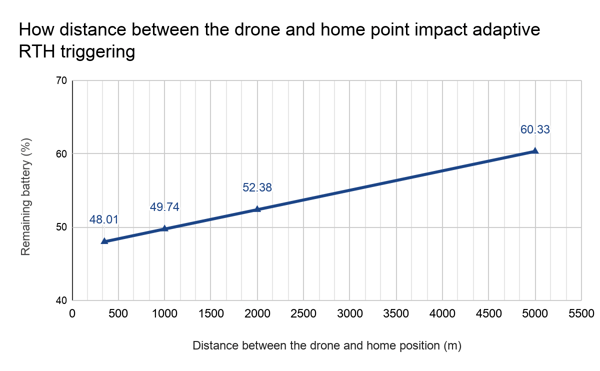 From the graph above, you can see how the distance between the drone and the home position will influence when adaptive RTH will be triggered.

According to the values visible on the graph, the shape of the area has only a minor impact on the flight time. In fact, this parameter should only be taken into account when part of the drone’s path is very far (> 5km) from the home point.